Posted on January 23, 2013 by workaholicvarun

Varun’s Word on the Short film Director who is making news with his latest 40-minute short film “Kuttimaa”.  Youtube is generally the medium for screening short films, however Ganesh Kumar Mohan (standing at extreme right in the below pic) plans to release “Kuttimaa” in preview theatres across different cities and overseas too, a new milestone in the short films circuit if that happens. Read on! 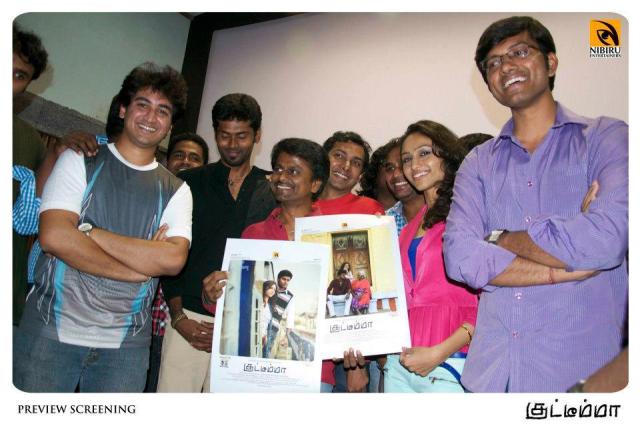 1. Ganesh, tell us something about yourself. Your early life, work life. When did you discover this passion to work on short films?

I did my schooling and college in my home town Coimbatore. After MCA, I worked in Bangalore for an IT concern for 4 years. During that time, I started short film making. Though the craze for film making did exist ever since my childhood, 2009 was the year where I practically did something towards my passion.

2. What was your first short film? Being the first time, was it the toughest experience?

My first short was ‘Brindavan’ in 2009, which was an amateur work. Without any theoretical knowledge or practical experience, I started the venture with the help of my close friends. It had a theme on old age homes and brain-drain. I had to spend a lot of time to get technicians, actors and locations. All were non professionals. With whatever I got, I completed the short film in 2 days. I myself tried editing and other post production works. Though it looks shoddy work, I feel it’s the learning step.

I have done 5 short films like ‘Brindavan’, ‘536’, ‘Ramasamy’, ‘O4P’, and now ‘Kuttimaa’. I myself produced my films except ‘Kuttimaa’ which is produced by Nibiru entertainers.  I used to spend out of my pocket and get help from friends in terms of casting and locations. I should mention about my core team members like Venkat Sundar, who acts in my movies and has got recognition for his unique style in acting, KB Prabu who shows his brilliance in cinematography, Abhinav Sundar Nayak who edits and make th movie crisp, Vinod varma who assists me and supports me all the time. I got my team mostly through social media where people come forward showing their interest to work with me and I collaborate with like-minded talents. My team comprises of people from different regions and backgrounds. Short films can generate moderate amount of revenue. But now, the platform is bigger than earlier days. So with wise strategies and good product, it is becoming possible to get the money back. More corporates and theaters should come forward to make this as an industry.

4. Director A.R. Murugadoss in his interview quoted that he was very impressed with your ‘Award winning’ short film”O4P” and he is pretty convinced that your team is capable of working in main stream cinema. Do you consider 04P gave you the first breakthrough to main stream movies?

O4P is definitely a milestone among our films. With the attention we got from Internet audience through our films like ‘536’ and ‘Ramasamy’, we wanted to give a better movie in all aspects and came up with ‘O4P’ and arranged preview shows before online release. The movie was received very well and crossed 6 lakhs views so far on Youtube. Fortunately, AR Murugadoss watched the movie in youtube and mailed me. I was so surprised to see an appreciation mail from him and contacted him back. He is a humble person who met our team and shared his appreciation in person and kept supporting our ventures. ‘O4P’ created a base for our team and garnered better attention among Internet audience.

5. “Kuttimaa” is your latest venture and it is making waves already.

So happy to see audiences supporting ‘Kuttimaa’ right from announcement to Preview show. Thanks a lot for their trust and affection towards our team. We are planing to have previews at all major cities and also overseas. Also planing to approach TV channels for telecast to reach wider audience. We are looking for distributors/channels to support our venture.

6. Tell us more on how was the experience watching the preview of “Kuttimaa” with Ace Director A.R. Murugadoss at the AVM theatre. Did he give you any tips or feedback?

It was really a great experience watching the movie with a person like AR Murugadoss who proved his excellence nationwide. We have shown the movie to him at his home personally and he appreciated a lot in detail. Also, he came to preview show and watched it second time with audience and loved the movie a lot. He spoke a lot about the movie and gave  strong recognition which eventually drew the attention of media too. He gave constructive ideas to improve the movie and also openly appreciated script and technical aspects in the movie. He gave a boost to our team by saying we have potential to make a feature film.

7. Do you plan to release this movie only in preview theatres or based on the response, would you consider releasing in a few movie theatres also? e.g. Sathyam Cinemas encourages ‘pure cinema’ and I am sure “Kuttimaa” would fit.

We are open to new ideas which will gain us financial benefit and also wider recognition. As the response is really great, we are moving forward with some more previews in other cities. We are planning to approach corporates like Sathyam Cinemas too. Hope we get enough guidance and support from the experts in the field and make this a profitable venture to pave way for upcoming short films.

8. How did you conceive this plot about a touching relationship between Grandmother – Grandson for “Kuttimaa”? Do you feel family values are important in these days of nuclear family / live-in relationship culture?

The plot evolved from my personal experiences. I find the relationship between a granny and her grandson is something novel, which comprises of fights due to generation gap, underlying affection etc. And I found not many movies based on this line. So I wanted to make a subtle emotional drama on this concept. I took some funny instances from my life and added some flavor to make the movie more interesting. Also, this movie emphasizes subtly on how elders are not taken care by their heirs which is a harsh reality. I would like to give entertaining movies with a good message for the society.

9. What are the future projects that you are working on?

I am planning to make a feature film soon and am working on script and looking for an efficient producer. Hope to enter the mainstream soon.

10. To all the working professionals out there who want to pursue their passion, but are unable to take the leap, whats your advise. You have been there, done that.

I went through those confusing days where your heart says pursue your passion but mind says just earn bread and butter. But there comes one point where you realise you can’t ride on two horses and have to choose one way. At that time, we have to gather all courage and confidence and move from comfort to courage zone. That transition period will be really tough but all we need is perseverance and hard work. When the right time comes, things will fall in place. We just have one life.  That does not mean, every one should right away throw the job and jump into film making. While working, they can do some short films and see if they can really shine well in the field. When they really gain confidence, they can take action.

This entry was posted in Celebrity Interviews and tagged kuttimaa, O4P. Bookmark the permalink.