What Roger Federer can teach you about Leadership, Performance and Passion

Disclaimer : This is purely in my view!

This Performance Appraisal season, ‘The Global Exceptional Performer – Roger Federer’ teaches us how to lead an inspired life.

1. Don’t emote during the task.

Federer is popularly known as the “Ice Man of Tennis”. During his initial years in Tennis, he used to dress up more like a rebel, with a pony. He used to take on the Mammoth Pete Sampras himself. As he was realizing his potential, he became aware that he has a higher role to play than just creating records. He starts refining his personality. He sets the path for wannabe tennis superstars. One of his remarkable qualities while he is at work is that he never leaks out a single emotion. We only get to see occasional pumping of fist when he wins crucial points. 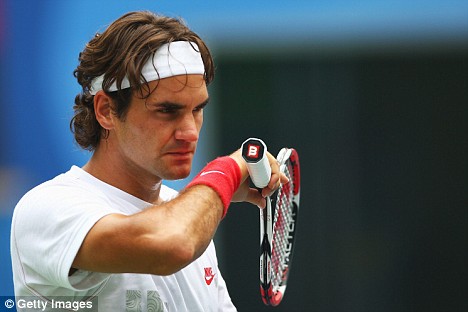 (The above pic says that there is something wrong with his performance, but that’s the worst his expressions get when all is not well)

2. Do Emote after victory or loss :

Federer said, “When you cry, you communicate with fans. I think they appreciate the fact that we care about winning and losing, we care about what they feel.”

What he teaches us : So remember the next time when you get promoted, you dont have to get into an empty restroom, sit on the commode and cry. You could let the occasional emotion come out at your workplace itself. Or you could throw a bash to your friends and team members and then break out. Breaking out would let your friends know how much you care about your work and how much the promotion means to you.

3. Even when Critics (i.e. best analyzers in the business) write you off, don’t give up. Bounce Back.

There used to be a time when Winning Grand Slams stopped making news for Federer. He was one week away from reaching the 287 weeks as World NO.1. He had to wait for two and a half years to complete that 1 week and equal Pete Sampras’ record and surpass it. The Critics wrote him off. He was 30 already. Only Andre Agassi made a come-back during his 30’s in recent times.

What he teaches us : Dreams and Records may tease you. Keep dreaming.

4. Live not only for your dreams but also for others’ dreams if possible.

Roger Federer grew up watching Pete Sampras. Pistol Pete was Roger’s hero. He was able to live his dream by playing against his hero. That was way back in 2003. Ten years have hence passed. Belgian David Goffin fills his room with posters of Roger Federer. He makes a mini speech after the match in French Open 2012. He says its a dream come true to play against his childhood Idol. Federer not only played to live his own dreams but also helped David Goffin achieve his dreams.

What he teaches us: Work towards realizing your dreams. At the same time, do get to know the dreams of your team members and help them achieve it.

In this modern era where professionals get bored and burned up in 2 years, Roger Federer stands as a pillar when it comes to loving one’s profession. He won his first grand slam in Wimbledon. His 17th Grand Slam came from Wimbledon too. When asked about what his retirement plans were, he simply says that he wants to be associated with the All England Club in whatever way he can. He wants to be associated as the ambassador of Tennis in whatever way he can.

What he teaches us: Find out what you love and stick to it all your life. Sounds more like “Steve Jobs” speech at Stanford commencement. He also teaches us that there is nothing wrong in sticking to a job more than 2 years. If you like your company, stick to it and keep performing like a pro, the Fedex way.